What comes to mind when you think of a brownie bite?  Maybe it’s a brownie biting you as you wake up from an obsessive chocolate dream–oh wait, that might just be me.

Early in our culinary chocolate expedition we wanted brownies–but not just any brownies.  We thought about going down a lot of roads to start but whether it was a nutty fudge or a caramel drizzle we kept having a problem feeling comfortable bringing them to the market–or shipping them for that matter.  I can’t quite recall what brought the two worlds together but a match made in little candy bar heaven started as we dipped rectangles of brownies into a tempered chocolate to create what we basically have today–a chocolate brownie bite. 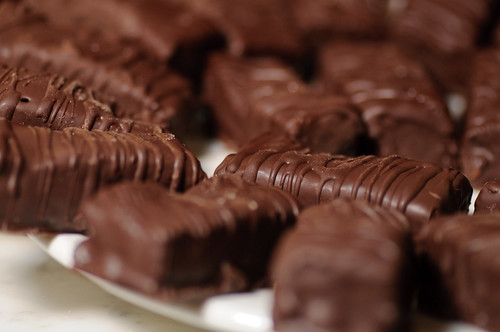 Chef Bill has his stock and trade of a fudge brownie recipe–which he won’t let me share, yet.  I can share that it is a delicate process of interweaving melted chocolate and chocolate bits which creates our chocolate chunk, chocolate chip effect.  Made as a sheet we then have to measure out (yea we measure) and cut in lincoln logs–well maybe not that long, about 3″.  [We used to have a mini-bite which was 1.5″ but our packaging we used is no longer being made.] We then chill them down for density and handling before dunking them in a bath of chocolate then laid lovingly single file for another chilling. A final chocolate attack is initiated to give them lines or at this time our chocolate brownie pops get their artistic personas.

The Ultimate in Dunking

The brownie bar makes for a great dunking vehicle.  I can often be found nibbling an end off a brownie and submerging it in milk..or warm caramel sauce (yea..) and devouring quite a few guiltily during the evening.  If this weren’t enough of a dunkable experience we make brownie pops which have a stick for the most leverage.  Sometimes I can be at Bill’s place and see a few sticks lying around and a peanut butter jar.  I know what he had for dinner. 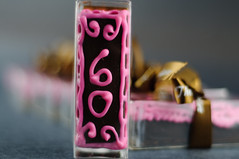 With a nice panel of space we’ve ended up decorating these with our own swirls and artwork.  It’s also been a favorite for birthday parties and favors to dress them up with monograms, dates, ages, tuxedos, or something decorative to match the festivities.  It’s all about being versitle–and of course having a good time.

Now, want to order some chocolate brownie bites for yourself?